The Scottish Publication, the Courier, has reported on the trade in contract cheating across Fife and Tayside. 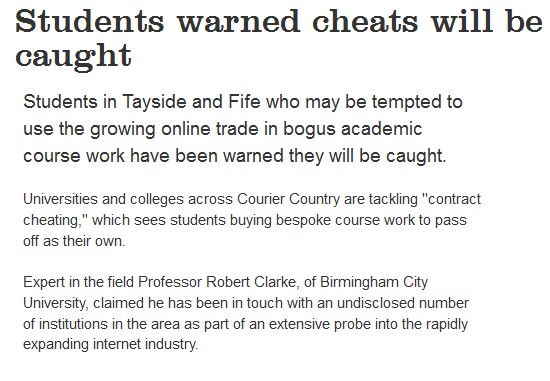 The report is interesting, as quotes are given from universities including St. Andrews, Abertay and Dundee, none of whom seem to believe that contract cheating is much of a problem.

As an example, the following statement was given by a Dundee University spokesman:

There have been two instances of sufficient seriousness during the last three years to be considered by our Academic Dishonesty Committee. Neither of these instances related to ‘contract cheating’.

Such a low rate of detection of what the article refers to as “written to order essays” is worrying.

This suggests that more needs to be done across the sector to address the perceptions that universities have about contract cheating and the ways that this academic integrity issue can be prevented and detected.

Dr. Thomas Lancaster is an international expert in academic integrity, best known for raising awareness of contract cheating through leading research and other activities. He regularly provides expert seminars and media commentary. Thomas is a Senior Fellow of the Higher Education Academy and a Computer Science practitioner. To discuss opportunities to work with Thomas, please contact thomas@thomaslancaster.co.uk.

We Can Write It For You Wholesale – Times Higher