The Times Higher Education and David Matthews have undertaken
a detailed look into the world of contract cheating and custom essay writing, in which Thomas Lancaster features prominently.

The article attempts to quantify the scale of the contract cheating and custom essay writing problem. This is difficult because it is largely underground, although estimates are obtained from official company figures and FOI requests from universities.

An interesting comments relates to students submitting their work in a format other than the one that an academic intended. This may be an indication that this uses a standard format pulled instead from an essay writing company.

Here’s a version of the recent stories on contract cheating and essay writing provided by the Telegraph:

Although the story largely covers the same ground as the BBC story on contract cheating, there are some interesting comments included.

There are some good suggestions relating to educational materials to help with writing essays, although these rather miss the underlying problem.

There is also a suggestion of using exams more widely. There are certainly sectors of society and industry that would support this.

One comment mentions that only the top half of UK universities should be allowed to recruit international students. However, there is no evidence to suggest that contract cheating is any more or less prevelent at any particular type of universities. My own observations would suggest that the so-called “new universities” are actually much more on-the-ball at spotting contract cheating and designing assignments to reduce the likelihood of students outsourcing their work. If nothing else, students at these universities are much more likely to be taught by a lecturer than at other universities.

An alternative view to consider would be that only universities that can show that they are actively taking action against contract cheating could be considered suitable to take on international students.

A report from ABC News raises an issue of what is called a “cheating scandal” taking place at Deakin University in Australia. An associated audio clip from ABC radio is also available. 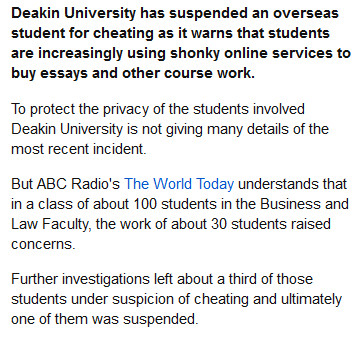 An issue with 30% of the students in one particular class coming under suspicion of cheating does show the seriousness with which Deakin University is taking online cheating.

It is also good to see that the university considers academic standards as more important than revenue from these intenational students. Hopefully, this trend will be evident within other institutions too.